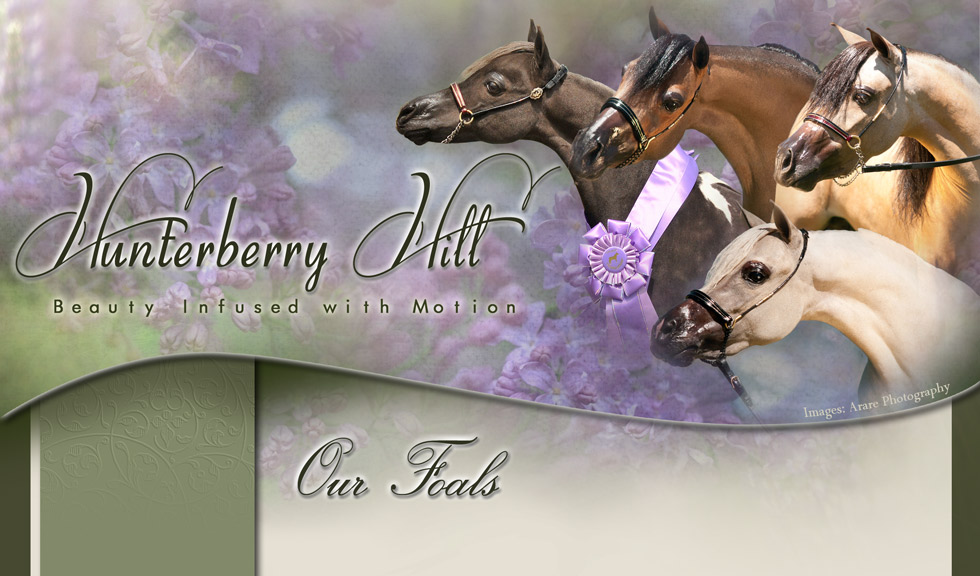 The horses prance and paw and neigh, fillies and colts like kittens play.
- Oliver W. Holmes
Our Foals from 2013 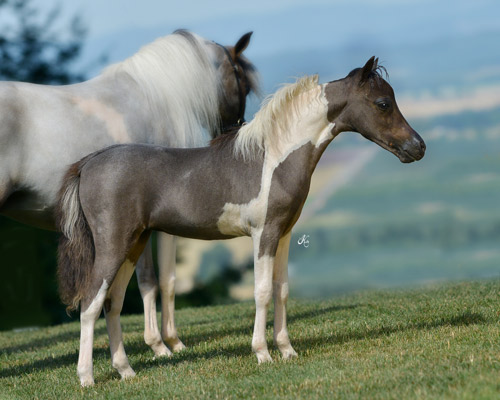 Hunterberry Hill Have a Little Jazz, aka "Daisy" is a beautiful refined filly out of our 2 x World Champion halter mare Hunterberry Hill JazzedUp Edition SE. This filly is line bred on L&D Scout and also carries the extreme lines of Grosshill Dandys Special Edition, who throws his up headed front end and great movement on to his get and grand get. 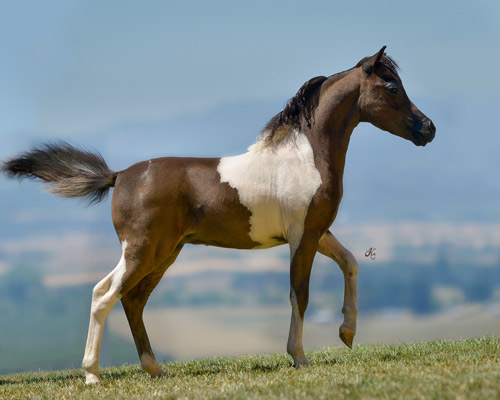 Hunterberry Hill Head Over Heels aka "Dover" was a super way to start off the 2013 foaling season here at Hunterberry Hill! He is extremely uphill and up headed, with a "look At Me" attitude! He certainly combined the refined elegance of his sire Fallen Ash Farms Handsome Eagle with the extreme neck set and athleticism of his dam KLS Classified Edition of Dandy SE. "Handsome" is a son of the well known 2012 World Champion Get Of Sire Stallion Fallen Ash Farms Eagle Scout who is a son of L&D Scout. Handsome is also a AMHA World Reserve Champion himself in 2012. Handsome's dam also carries the sought after bloodlines of Bond Boozer through the AMHA National Champion Stallion Martins Boozers Dark N Dazzling. "Dover's" dam is a daughter of the outstanding sire Grosshill Dandys Special Edition who is the sire of MANY AMHA World Champions in halter and driving. Most recently he sired the 2012 AMHA World Reserve GRAND Champion Country Pleasure driving horse. "Dover's" dam is also a granddaughter of the famous stallion Flabys Supreme, being out of a Flabys Supreme mare. Some of the best bloodlines in the industry have combined in this fantastic colt! 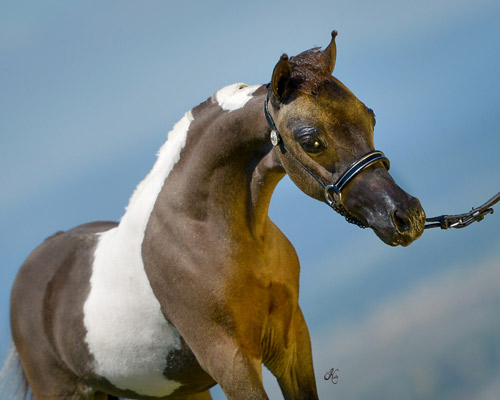 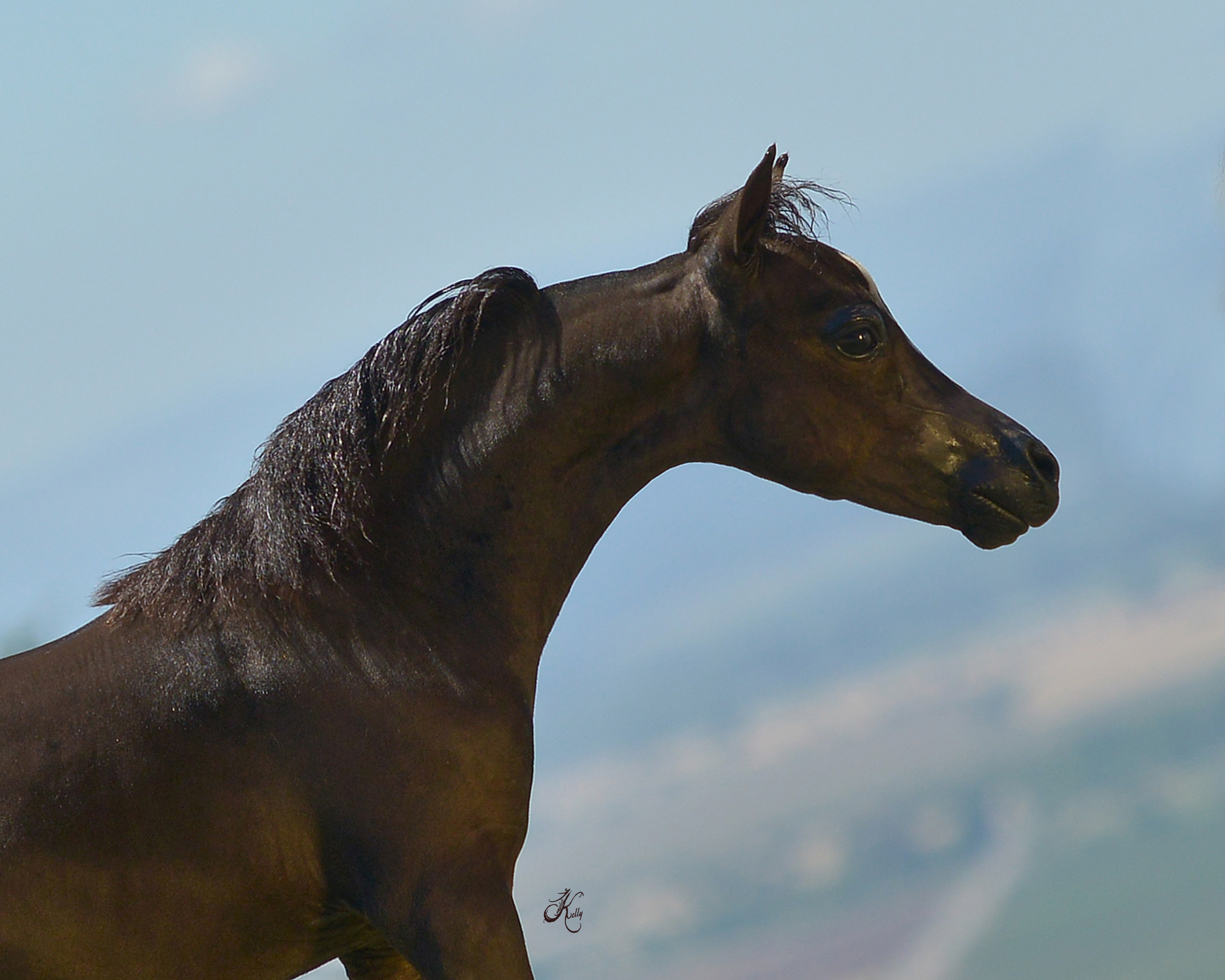 Hunterberry Hill He's A Charmer is an extremely modern, refined, and stretchy colt! He is sired by our Eagle Scout Son Fallen Ash Farms Handsome Eagle, and out of a daughter of the well known Sierra Dawn Unos Monarch. His dam is not only by Monarch, but out of ERL Spectacular Showkayce who is sired by WF Pattons Spectacular Bey, and also goes back to Rowdy.
Hunterberry Hill Jazzed Up Again SE has it ALL! She is a huge mover, with extraordinary hock action and unbelievable reach! Jolie also has a high neck set with extreme length and hook! Jolie will go far in the halter ring and the driving arena! Jolie is a full sibling to Hunterberry Hill JazzedUp Edition SE who is a 2x AMHA World Champion Halter horse, and also Hunterberry Hill I'm JazzedUp 2 SE who was an AMHA Western Regional Grand Champion Halter Mare!
Hunterberry Hill High Hopes 4U is sired by Fallen Ash Farms Handsome Eagle, a Reserve World Champion! Her dam is one of our favorite mares, Hunterberry Hill Toy BabyDoll 4U. This mare is a stunning daughter of the World Grand Champion Stallion Bond AToy4U C, who is the sire of multiple AMHA World Champions, and even a World Supreme Champion. The mare is also out of our best producing broodmare Minis R Us Tinker Toy, who carries the lines of the famous Buckeroo, and who consistently produces show quality correct foals. This filly carries valuable bloodlines, and would be a great addition to any herd! She is correct and has a beautiful sculpted head with large kind eyes, and will be a stunning black color. She is ultra refined, and has a wonderful personality. 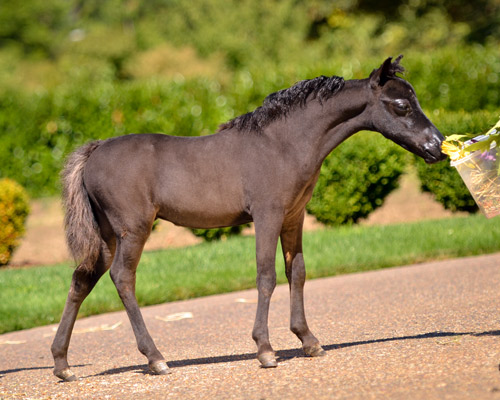 2x 2013 AMHA World Top Five Colt, Under
SOLD to the Tomb family of Spur Ranch in Bend, Oregon. Charmer is so lucky to have sweet little Reagan as his new owner!
SOLD to the Lockrem family in Bend, Oregon.
Wishing Bridget and Hope many happy years together!
SOLD - Congratulations Tara and Zac! Oh, the adventures Dover will have with you!
SOLD - Congratulations to Toby's new family, we know he will become a special part of your family!